Hallo liebe GNTM-fans! New season of Germany’s Next Topmodel mit Heidi Klum has started last week. Since I’m a stan + I need to keep my German (and English as well) on a supportable level, I decided to make weekly overviews of new episodes and maybe I’ll be posting spoilers too. Yalla! And don’t hesitate to post comments, guys 😉 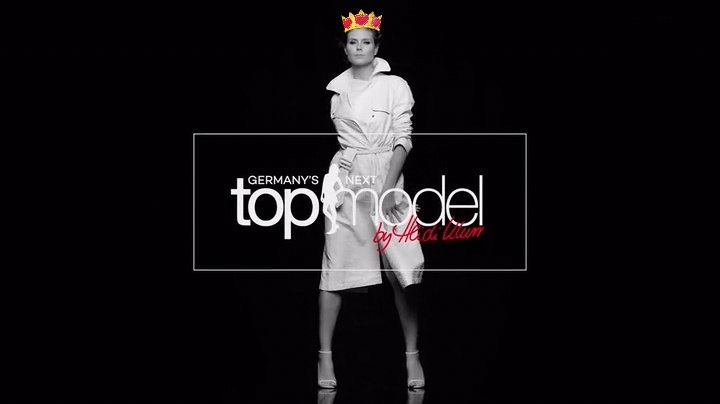 Here’s a full list of girls who made it / Полный список участниц:

It all started with a roadtrip to Las Vegas. On the way to the city of casinos and gambling they made a stop in a desert to spend the night in Marmot tents and have a «Queen of the desert» shooting-challenge. Winners will stay in a luxury Treasure Island hotel, losers in Motel 8. Girls had to choose their own outfits, put on make-up and decide about the order of shootings. Team Michalsky was the best.

Meanwhile Carina, Giuliana and Greta were casted in Paris for Kaviar Gauche wedding dresses campaign. They expected more from Giuliana, but her and Carina were not good enough, so they chose Greta instead.

In Las Vegas GNTM girls first of all had a burlesque photoshooting with the artists from Mystere show by Cirque du Soleil. Star photographer Ellen von Unwerth took the pictures and then took her place in the jury during elimination walk combined with a wrestling show in a hall with a live audience. Neele was out. Lynn, Ahn, Greta and Sabine were invited for a casting in New York.

Giuliana showed her worst this week so she has to go very soon I guess. Carina gets bigger (fatter) each episode, «schüchtern» Julia should have been kicked out long time ago together with sauer-face Leticia. And still no REAL jobs in USA. Shame on Heidi & Prosieben! (USA-based german companies do not count as REAL model jobs).

Another boring week at GNTM. First thing was the Desert-Dirt shooting with Christian Schuller, who was a jury-member some seasons ago. He’s making unusual staged photos, but this time it was not that nice. Looked like some Mad Max parody. Heidi’s helping hand was another german model Nadine Leopold, but one could barely see her coaching girls.

Nikeata Thompson and Mac Folkes are back for teaching contestants how to walk. As always, it’s only few girls who can really walk and the reat are a huge disaster. Levi’s outfits don’t make wonders.

Serlina, Maja, Celine and Carina were casted to be on the cover and spread of Shape magazine (Germany). Christina Hammer had a training with the girsl and after watching it chief-editor Anna Tiefenbacher chose Celine.

Elimination walk took place in Junk Yard, a place with tonnes of crashed old cars. One team was wearing crystal outfits, another team some strange disco-alien stuff. Nosy Melina is finally out. Greta, Giuliana and Carina went to Paris for the casting.

Wow. It’s already the fouth episode and still no jobs, no runway, no anything. So slow this year it’s freaking me out. Okay, top-20 ariived to Los Angeles and instead of moving to luxury Model Villa somewhere in the suburbs of Hollywood settled in some sh*tty Model Loft. The most exiting part with Makeover / Umstyling turned out to be disturbing and not fun to watch. Oh ny gosh, it’s been 11 seasons already and one must know that saying «no» to makeover means a kick-out. Just relax and enjoy, bitte! Hysterical reactions and tears piss me off and make me want to turn off the online-stream. At the end they didn’t change too much. Heidi’s hairstyle artists made girls’ hair look healthier and more expensive. Small changes of hair colortone, nice haircut or styling — that’s it. Maybe the lack of mirrors made GNTM contestants nervous, but come on — you’re part of the show, you’re with a Model-mama. Nothing bad is going to happen. For example, last episode they had to cut Leticia’s hair really short and in this episode Heidi Klum bought her 6 cool wigs. The worst thing was Giuliana’s toe nails. Ewwww. It looks like she has fungus or something. Oh and silly Helena decided to leave the show — her hair was more important.

Right after «Grosse Umstyling» there was a sedcard-shooting with celebrity photographer Bryan Bowen Smith. Some girls looked really amazing on the photos. Brenda and Aissatou had a shoot-out and Aissatou lost and had to go back to Germany.

Elimination walk took place on Huntington beach. Girls did wear some strange clothes which supposedly represented their personalities and carried Aliexpress balloons. 6 contestnats were criticised for walk and (or) sed-cards: Melina, Deborah, Lynn, Julia, Neele and Sabina. Deborah had to go. Well, I think Melina should have gone home long time ago, but they keep her for the show. Unfair. Ad also one girl (Lynn, I suppose) showed a middle finger to the Jury. Will they leave it unnoticed? I thought that Heidi’s gonna kick her out immediately after this accident.

Astoria cruise ship went to Menorca for another photoshoot. On the way to Menorca Neele and Claudia cried a lot while phonung parents/boyfriends. It’s gonna be a shoot-out for them which means the weakest girl on the shotting will have to leave for sure.

The photographer was the same — Max Montgomery. GNTM contestants were divided into pairs — one girl from team Thomas (purple dresses), anither girl from team Michael (red dresses). Models were hanging 8 meters high above the water standing on the huge boxes. I call it a pervert photoshoot, ’cause viewers could see girl’s underwear (or lack of it) and between-legs situation. Also lots of one-leg shots, which have been a no-go in the early GNTM seasons. Everyone’s waiting for Neele/Claudia duel, since they had a struggle between the episodes. Product placement: Meßmer tea. Claudia was weaker on set, so Heidi told her to get out.

Last stop before flying to Los Angeles is Barcelona. GNTM girls will make a sexy catwalk show  in club Astoria after some training with the help of Nikeata Thompson (team Michalsky) and Mac Folkes (team Hayo).The weakest contestants will go back to Germany. Girls walked in the following order:

GNTM Staffel 12 Folge 2: gntm-girls stepped on board of a cruise ship Astoria in Marseille and went on a short trip around southern Europe. It was said that contestants will spend 2 weeks sailing around which means two episodes — episode #2 and #3. First destination was Palma de Mallorca. On the way to the spanish island had some hard work to do and by hard work I mean a quick photoshooting where two teams of Hayo and Michalsky were competing with each other to get the best cabins. Girls were divided into pairs (one girl from each team). The camera was on and «kandidatinnen» had only one try to get the best shot which they were taking themselves by clicking a button on a remote controller. Some girls were smart, but most of them acted really stupid and were pressing the button accidentally. Team Michalsky won the competition and moved into oceanview suites. Losing team Hayo settled in inside cabins on the bottom of Astoria. Many girls were suffering from seasickness and Carina somehow managed to get an eye virus infection. And of course rivers of tears because it was a bikini shooting and the girls were not ready or whatever.

The next day Astoria cruise ship came to Palma de Mallorca. Another day, another shooting. This time with a star-photographer Max Montgomery. GNTM-girls wore avant-garde swimsuits and were posing standing on a surfboard with a paddle in their hands. It was wet, it was cold. Most of the photos with girls STANDING on the board looked creepy and ugly, ’cause they had to spread their legs too wide and it didn’t look nice. The best shots were taken with girls sitting in the water leaning on the board. After the second shooting Christina and Saskia were eliminated.

Final challenge of the second episode was a catwalk on the deck, a so called «Entscheidungswalk». Contestants were wearing blue and green garments of the same design. Successfull gntm-girls got portfolios with their first pictures in it. For Elisa and Victoria Heidi Klum had no photos, fortunately. Which means this season won’t be any clowns on the show and it’s super-gut. Neele and Claudia were on the edge of elimination as well. New thing for them in this season is a «shout-out»: Neele and Claudia will be competing with each other in the next episode on a photoshooting. The weakest girl will leave the show immediately after the photoshooting.

Main prizes of Germany’s Next Topmodel 2017 are: cover of the Cosmopolitan magazine, 100000 euros, Opel Adam Topmodel edition and a model contract with One Eins fab. Finally a money prize!

My opinion about second episode of GNTM 2017: better than the first, but still BOOOOOORING! 28 girls is a bit too much. Even 24 is too many . Hopefully they get rid of many of them in the 3rd episode which will take place in Menorca. Only 3 same old challenges, rivers of tears, no fashion and no stars. Don’t keep me waiting, Heidi! I can lose my patience and last drops of interest in  watching GNTM. Still I have no favorites. Transgenders turned out to be the least fun people on the show. Both «girls» are whiny. Minus punkt! Melina should go home right now. Heidi Klum is being cruel to her, telling she’s something she is definetely NOT. By the way, Giuliana’s photo is missing in the paddle-board gallery on Pro7-website. What does that mean?

First episode was aired on 9th of February. It took me few days to find a streaming video of GNTM s12e01. All the sources I used before are not working anymore. Serienjunkies and Dokujunkies, for example. I don’t understand why german tv-channels including Pro7 and streaming websites are closed for Russia. Is it a copyright thing or what? Also Youtube official channel of GNTM is not available for viewing. Such a stupidity of them! Anyway, was the first episode of GNTM Staffel 12 worth watching? Yes and no.

I was glad to see Heidi Klum and Thomas Hayo back. Unfortunately, I have skipped last year’s GNTM, so don’t really know Michael Michalsky. He looks fun, anyway. And much more pleasant to look at than Wolfgang Joop. They are making the same thing with teams like in any other random reality-show and for me it doesn’t make any sense. Team Hayo competing against Team Michalsky. And the main «Jurorin» is Heidi Klum.

In the first episode they showed us Thomas and Michael doing preliminary castings in Cologne and Munchen and a final casting in Kassel Airport now with Heidi Klum deciding who will definetely NOT become Germany’s Next Topmodel 2017! New season is all about DIVERSITY. That’s is why we have not just few girls with a different skin color, but also 2 transgender «Kandidatinnen». Previous seasons all transgender models were eliminated during castings. Now it’s different because a new generation of young transgender models has grown + tolerance is praised + world of fashion has officially given a green light for transgender models. Latest example: Valentina Sampaio on the cover of french Vogue (March 2017). So, my guess is Heidi Klum will make one of those transgender contestants the winner of GNTM 2017 just to make a hype around the show + that will be a big step forward in promoting tolerance.

First episode of GNTM season 12 showed a rise of audience comparing to previous 5 years or smth like that. Well… for me it was boring as hell. 2 hours of a big desire to stop watching GNTM ever again. Some girls had more screen-time than they actually deserved. No cool faces or  fun personalities at ALL. What’s going on, Heidi? Hope it’ll get better in the next episodes.